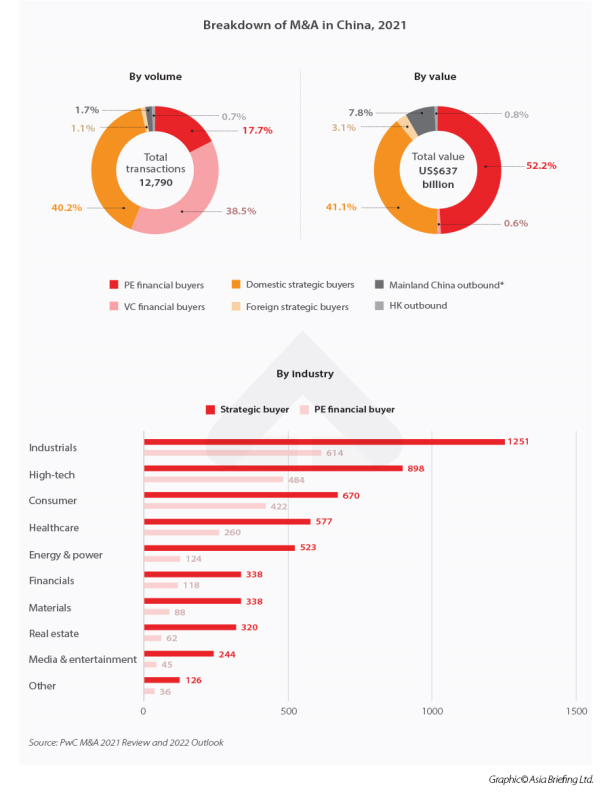 China saw a record number of M&A deals in 2021, with increases in the transactions led by domestic strategic buyers and investment firms. The start of 2022, however, saw a period of cooling due to an increasingly uncertain domestic and international economic outlook. Under this climate, companies and investors have been looking to future-proof their assets and mitigate risks by investing in strategic and emerging industries.

2021 was a year of renewed economic activity in China in the wake of the COVID-19 pandemic. Economic indicators across a broad range of fields recorded strong numbers, with new records seen in foreign investment, trade, and merger and acquisition (M&A) transactions.

Going into 2022, however, new and old challenges have dampened economic growth. COVID-19 control measures have limited the scope for a sustained economic rebound and consequently, hindered inbound and domestic M&A activity. Meanwhile, increasing uncertainty in the global environment, stemming from issues such as the Russia-Ukraine conflict and high inflation rates in developed countries, is discouraging outbound M&A transactions.

Companies and investors are thus looking to build their presence in strategic industries, which can help them hedge against potential risks and consolidate their position in key markets. On the other side, national policy directives that aim to be investment-driven, such as digitalization, decarbonization, and consumption, encourage M&A deals in the sectors aligned with these policies.

The number of M&A deals in China in 2021 reached a record high of 12,790 transactions, according to the PwC M&A 2021 Review and 2022 Outlook. This is an increase of 21 percent from the previous year. However, the total value of M&A deals fell 19 percent year-on-year, falling to US$637 billion. This drop in total value is attributed to fewer mega-deals of state-owned enterprises (SOEs). The lion’s share of M&A deals in 2021 was taken by financial buyers, with a total of 7,189 deals. Private equity (PE) deals, while covering just 17.7 percent of total transaction numbers, accounted for over 50 percent of the total deal value for 2021, despite overall value dropping by six percent from 2020. Venture capital (VC) deals – embodied by smaller-scale investments in innovative start-ups – saw a huge uptick in volume, growing 46 percent to 4,920 transactions.

Domestic strategic buyers accounted for the second-largest share of transaction volume, with 5,143 deals, a 14 percent increase from 2020. The number of transactions by foreign strategic buyers dropped by 22 percent, likely due to the impact of strict COVID-19 containment measures, as well as a series of regulatory crackdowns on industries such as technology, education, and real estate.

The hottest industries for both strategic and financial buyers in 2021 were industrials, high-tech, consumer, and healthcare. This trend is also reflected in the industry composition of mega-deals in 2021. Of the 97 M&A transactions valued at over US$1 billion, 23 were in industrials and 17 were in consumption-related fields. These findings align closely with China’s national strategies, such as industrial modernization and the “dual circulation” strategy to boost domestic demand and international trade.

The VC industry had a breakout year in 2021 despite regulatory headwinds. There is currently little data specifically on the different types of M&A deals by VCs in China, but according to investment data firm Preqin, total investments by VC firms almost doubled from the 2020 figure to reach US$130.6 billion, a record high. The VC industry was able to circumvent the crackdown on the technology and education industries, traditional magnets for VC investment, by moving away from segments in the regulatory hot seat.

In the technology industry, for instance, focus shifted from software and platform companies to semiconductors, robotics, and biotechnology.

The domestic M&A market in China cooled somewhat at the beginning of 2022. China’s economic growth slowed during this period due to factors such as an uncertain pandemic situation at home, macro-economic and supply chain instability exacerbated by the Russia-Ukraine war, and high inflation rates in overseas markets.

These factors are likely to have impacted the country’s domestic and cross-border investments.

The 1,001 deals that disclosed transaction amounts reached a total value of US$60.4 billion, a quarter-on-quarter decrease of 58.49 percent and year-on-year decrease of 40.75 percent. Manufacturing, healthcare, and IT were the three top industries for domestic M&A activity during this period. Cross-border M&A transactions also dropped in the first quarter of 2022, with a total of 28 deals announced, down from 44 in the fourth quarter of 2021. Of these, 19 were outbound and nine were inbound.

Despite the decrease in the number of transactions, the total value of cross-border deals shot up in the first quarter of 2022 – the combined value of the 22 deals with disclosed amounts increased 186.33 percent from the previous quarter and 57.6 percent from the same period in 2021. There were two cross-border transactions valued at over US$1 billion, which included a 25 percent share acquisition by BMW in its Chinese JV company, BMW Brilliance Automotive, for US$4.4 billion.

China’s two major carbon targets – reaching peak carbon emissions by 2030 and carbon neutrality by 2060 – give huge impetus to the development of the renewable energy industry. China already leads the world in renewables like wind and solar, and with huge growth potential, the market has become a magnet for global investors.

This is best evidenced by the 80 percent year-on-year growth in M&A transactions in the field of renewables in 2021, reaching a record 803 reported deals with a combined disclosed value of RMB 402.9 billion (US$60.2 billion). Among these were 230 deals in the solar energy field, with a total reported value of RMB 73.7 billion (US$10.9 billion), up 70 percent and 39 percent year-on-year, respectively.

China’s new energy vehicle (NEV) sector is also experiencing rapid growth, with sales growing at a staggering 162 percent from 2020 and reaching an estimated 2.9 million battery electric vehicles. Investors have taken note – in 2021, there were 108 M&A transactions in the NEV field, worth a reported total of RMB 79.8 billion. That is a 120 percent increase in transactions and 58 percent increase in value compared to 2020.

Despite a slump in NEV sales in the first four months of 2022, sales recovered significantly in May and June, signaling demand is still high. In addition, the expansion of vast solar and wind projects in China’s desert regions announced in March 2022 will likely keep investors and industry insiders interested in the new energy sector in the coming months and years.

The drive to digitalization, and in particular the digital upgrade of traditional industries, has been a core goal of China’s development strategy over the past decade. The COVID-19 pandemic has further spurred activity in the industry as companies increasingly value the need to integrate digital technologies, leading to increased strategic acquisitions of software and platform companies by enterprises in traditional industries.

A natural consequence of the digital transformation of China’s economy is a growing demand for data centers. Financial investors are increasingly attracted to the industry’s growth potential, with PE firms being particularly active in the field.

A major effect of the COVID-19 pandemic has been disruption to global supply chains, which, although not solely to blame, has had the knock-on effect of increasing the price of shipping and commodities, placing further strain on companies.

One such deal is Maersk’s US$3.6 billion acquisition of Hong Kong logistics company LF Logistics in 2021, which increased its global warehouse footprint and greatly expanded its land-based abilities in the Asia Pacific region.

At the same time, offloading assets and reorganization is becoming an important means for cash-strapped companies to slim down and mitigate market risks. This in turn provides new opportunities for companies looking to buy. Many of these struggling companies are being snapped up by SOEs.

For instance, the chemicals SOE Sinochem Holdings, itself a restructuring of Sinochem Group and ChemChina, now holds 16 listed companies in China and abroad.

PE firms reached a record number of M&A transactions and accounted for over half of the total deal value in 2021. They also had stronger presentation in both inbound and outbound cross-border M&A.

The number of PE and VC funds has also shot up in recent years. According to the 2021 China Equity Investment Trends report from KPMG, there were 9,748 PE and VC funds registered in China in 2021, a year-on-year increase of 27.8 percent. Major PE M&A deals in 2021 include Hillhouse Capital’s EUR 3.7 billion (US$3.8 billion) acquisition of Philips Domestic Appliances and Blackstone’s majority stake acquisition in the Guangzhou International Airport R&F Integrated Logistics Park.

Bain & Company’s Global Private Equity Report 2022 gives some perspective on this, its findings showing that PE capital deployed in markets like China are following the trend of growth investing – even accepting lower returns in the near term as digital disruption and new business models work on volume and velocity.