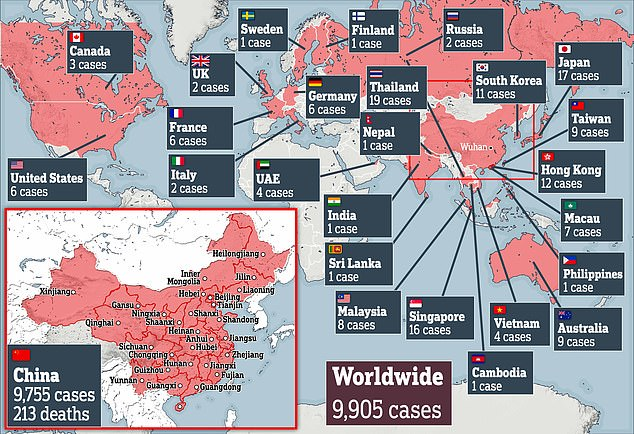 China’s ambitious trade and infrastructure development plan could be the latest victim of the deadly coronavirus outbreak that is spreading from China to the rest of the world.

Since the contagion was first reported at the end of last year, many countries have imposed entry restrictions on Chinese visitors, including several that are hosting mega projects being built under Beijing’s multibillion-dollar Belt and Road Initiative.

On Wednesday, Bangladesh-China Power, the joint venture company behind a US$2.5 billion power plant under development near the port of Payra – about 320km (200 miles) due south of Dhaka – said the commissioning of the project had been delayed because the Chinese workers who had gone home for the Lunar New Year holiday had been unable to re-enter Bangladesh.

Acting managing director Khurshedul Alam said it was unclear when the work, which was planned for this week, would now be carried out.

“We can’t do the post-test-run maintenance as some workers are stuck in China in the wake of the coronavirus epidemic,” he was quoted as saying in a report by Bangladeshi newspaper The Business Standard.

He said he hoped operations at the 1,320 megawatt plant – where about half the 6,000 workers are Chinese – would get back to normal later this month.

Meanwhile, Obaidul Quader, Bangladesh’s minister for road transport and bridges, said that work on the country’s largest ever infrastructure development – a US$1.1 billion road and rail bridge across the Padma River – was also under threat.

The project, being built by China Major Bridge Engineering Company, would face delays if the coronavirus outbreak continued to worsen, The Daily Star, Bangladesh’s main English-language newspaper, quoted him as saying at a press conference on Wednesday.

Dewan Abdul Quader, executive engineer and project manager on the Padma Bridge scheme, said that about 330 of the 980 Chinese workers involved on it were effectively stuck in China, while those already in Bangladesh were unable to leave.

Authorities in Dhaka stopped issuing on-arrival visas to Chinese visitors on Sunday and said that all Chinese citizens applying for regular visas would be required to provide medical certificates.

As of Saturday morning, there were more than 34,000 confirmed coronavirus cases and 700 deaths in mainland China, and two deaths elsewhere in the world.

There have been similar problems in Pakistan, which is another major collaborator on China’s infrastructure development plans.

Last week, Asad Umar, Pakistan’s minister for planning and development, was quoted by local newspaper The Nation, as saying that the US$62 billion China-Pakistan Economic Corridor (CPEC), a central component of the broader belt and road scheme, could face delays if the coronavirus outbreak became a prolonged issue.

However, Yao Jing, China’s ambassador in Pakistan, said projects would not be halted by the outbreak and that officials would make sure all workers were monitored daily for any sign of infection.

Despite Yao’s comments, observers said there was a high chance of both belt and road and CPEC projects being delayed.

“There might be disruptions, especially if there are restrictions on the entry of workers, as most belt and road projects are built with Chinese labour,” said Nadege Rolland, a senior fellow at the National Bureau of Asian Research, a US-based think tank.

W. Gyude Moore, a visiting fellow at the Centre for Global Development in Washington, said the proximity of Bangladesh and Pakistan to China might have worked against them.

“Because they are much closer to China, more Chinese workers are likely to have gone home for the Lunar New Year,” he said.

“Chinese workers on projects in Africa will have also made the trip, but the distance and cost of travel means there would have been fewer of them.”

Rolland said there was also the possibility that the coronavirus outbreak would stoke anti-China sentiment in countries hosting Beijing-funded projects, where Chinese workers were often regarded as stealing local jobs.

“It’s possible it will feed prejudices and increase animosity towards Chinese workers,” she said.

Despite the temporary setbacks, Moore said it was unlikely there would be any long-term problems with the belt and road plan as many nations, especially in Africa, were in desperate need of Chinese investment.

“Few other partners with the necessary resources and expertise are willing to provide large-scale infrastructure at the prices China offers,” he said.

“But that doesn’t mean host nations are not concerned. Most African countries have weak health systems and can’t afford an outbreak like this,” he said.

“Many have started taking preparatory steps, but it would be a shock if the virus changed African policy towards China.

“Coronavirus or not, China will remain the partner of choice.”