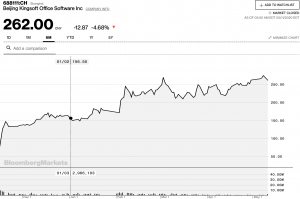 The Shanghai Stock Exchange’s (SSE) Science and Technology Innovation Board, known as STAR market and dubbed the “Chinese Nasdaq,” has raised more than 217 billion yuan (US$30.39 billion) for 133 listed enterprises since it started trading on July 22 last year.

The listed companies on the STAR market, which kicked off a trail-blazing leg of China’s innovation drive and capital market reform, had a total market value of more than 2.62 trillion yuan as of Tuesday.

These companies mainly engaged in businesses related to the new generation of the information technology industry, high-end equipment manufacturing and the biopharmaceutical industry.

Marking the board’s anniversary, the benchmark Shanghai Composite Index will include stocks listed on the STAR market to increase the weighting of emerging technology industries. The first index of the STAR board will become available on Thursday to reflect the stock performance on the board.

In June, the Shanghai Stock Exchange announced it will adjust the calculation methodology of the benchmark index.

Launched in 1991 as the first stock index in the A-share market, “the Shanghai Composite Index is the oldest, most recognized and most frequently used index in the securities market by investors to represent average market returns,” said Yan Jiawei, an analyst with Huaan Securities.

However, as the number of shares in the market increased and the stock fundamentals diversified, the original calculation failed to reflect overall stock market performance, Yan said. To ensure the stability of the index, the new calculation scheme will remove stocks that receive a risk warning from the stock exchange, he added.

Since last year, China has been advancing the reform of separating business licenses from administrative permits to streamline approval procedures in 18 pilot free trade zones, Yang Hongcan, an official with the State Administration for Market Regulation, said Wednesday.

Business start-up services for enterprises will be further optimized to facilitate business operations of enterprises, Yang said. The time needed to start a company will be reduced to four working days or less by the end of this year, he said.

Location restrictions on business registration applying to micro and small enterprises and self-employed people will be relaxed, Yang said, adding that a negative list management system for locations of individual businesses will be established and improved as soon as possible.

The People’s Bank of China (PBoC) pumped cash into the banking system via reverse repos Thursday. The central bank injected a total of 50 billion yuan into the market through seven-day reverse repos at an interest rate of 2.2%, according to a statement on the website of the central bank.

As 50 billion yuan of reverse repos matured Thursday, the operation led to no net injection.

China will pursue a prudent monetary policy in a more flexible and appropriate way, according to this year’s government work report.

According to Alipay, the success rate of pet noseprint recognition technology exceeds 99% and is expected to be applied to urban pet management and lost pets in the future.

By Nadeem Xu on July 23 for the Asia Times (Singapore).